Air systems use air as the thermal medium. The intake air could be direct either from atmosphere or from the cabin and could also be conditioned air after a heater or evaporator of an air conditioner. The former is called passive air system and the latter is active air system. Active systems can offer additional cooling or heating power. A passive system can offer some hundreds of watts cooling or heating power and an active system power is limited to 1 kW.

The two cases are both called forced air systems because in both cases the air is supplied by a blower.

Liquid cooling is a cooling system where water is used as the coolant for the purpose of cooling the battery. And liquid cooling is the most commonly used cooling system due to its convenient design and good cooling performance. There are generally two groups of liquids applied for thermal management systems. One is dielectric liquid (direct-contact liquid) which can contact the battery cells directly, such as mineral oil. The other is conducting liquid (indirect-contact liquid) which can only contact the battery cells indirectly, such as a mixture of ethylene glycol and water. Between these two groups, indirect contact systems are preferred in order to achieve better isolation between battery module and surroundings and thus better safety performance. By different heat-sinks for cooling, liquid systems can also be categorized into either passive systems or active systems.

In liquid cooling, Trumony has been one of the global leading and most specialized suppliers of liquid cold plates. Brazing type,extruded type, and roll bond plate type are all available for customization. 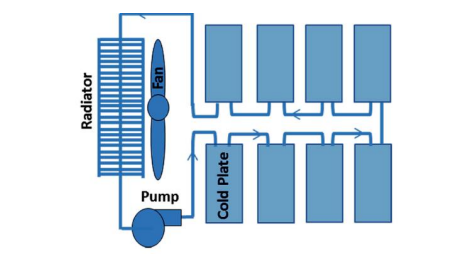 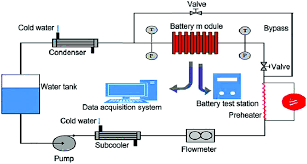 The phase change material absorbs heat throughout the melting process and conserves it as latent heat until it reaches the maximum value. In addition, the PCM is always combined for a period of time, the temperature remains at the melting point, and then the temperature increase is delayed. Therefore, PCM is used as a conductor and buffer in BTMS. In addition, the PCM is always combined with another BTMS system (e.g., liquid or air-cooled) to manage the cell temperature.

Thermo-electric module can convert electric voltage to temperature difference and vice versa. Here the former effect is adopted. That means it transfers heat through the module by consuming electricity directly. Two fans are installed to improve heat transfer by forced convection. To combine a passive air system with thermo-electric module, the combined system is able to cool down the battery even lower than the intake air temperature, but the power is still limited to around some hundreds of watts and less than one kW. The main problem with this cooling is the safety of the system which can be a concern in the case of an emergency; a short circuit can happen due to the coolant leakage on the battery cells which can cause a failure of the vehicle and can be fatal. Also, the capillary tubes require a minimum diameter to maintain an adequate pressure drop and avoid blockage. 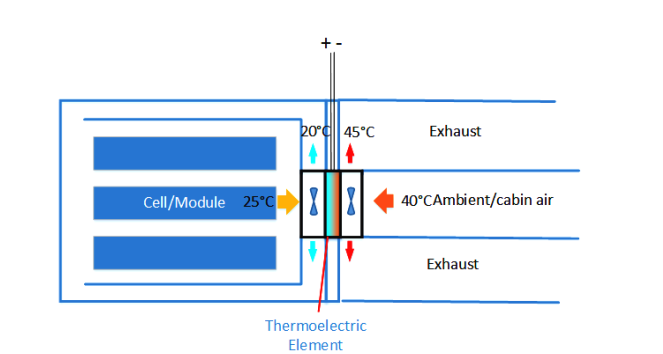 Besides thermo-electric modules, a heat pipe is another way to upgrade passive air systems. The flat copper envelope of the heat pipe was under partial vacuum. The capillary structure is made of sintered copper powder. The heat pipe uses water as the working fluid. Water on the evaporator side will absorb heat and become vapour lower 100°C due to low pressure inside. Water on the condenser will dissipate heat to the surrounding and become liquid again. This cycle repeats again and again.