Español
You are here: Home » News and Events » Market trends » Charge up to 80% in 15 minutes, CATL released the first-generation sodium-ion battery

Charge up to 80% in 15 minutes, CATL released the first-generation sodium-ion battery

The sodium-ion battery that had been warmed up for several months finally came out. On the afternoon of July 29, CATL held a sodium ion battery press conference.

1. Break through the bottleneck of sodium ion battery technology

The sodium ion battery has a similar working principle to the lithium ion battery, and the charge transfer is realized mainly through the insertion and extraction of sodium ions between the positive and negative electrodes.

However, compared with lithium ion, sodium ion has a larger volume and more stringent requirements in terms of material structural stability and dynamic performance. This has also become a bottleneck for the delay in commercial use of sodium ion batteries.

Ningde era has been deeply involved in the research and development of sodium ion chemical system materials for many years: in terms of cathode materials, Ningde era adopted Prussian white material with a higher gram capacity, and innovatively rearranged the charge in the bulk structure of the material to solve the problem of Prussian white recycling. The core problem of rapid capacity attenuation in the process.

In terms of negative electrode materials, CATL has developed hard carbon materials with unique pore structures, which have the characteristics of high gram capacity, easy deintercalation, and excellent cycling.

Based on a series of breakthroughs in the material system, the first-generation sodium-ion battery developed by CATL has the advantages of high energy density, high rate charging, excellent thermal stability, good low-temperature performance and high integration efficiency.

The energy density of the battery cell is as high as 160Wh/kg; charging at room temperature for 15 minutes, the power can reach more than 80%; in a low temperature environment of -20°C, it also has a discharge retention rate of more than 90%; system integration efficiency can reach 80 % Above; thermal stability far exceeds the safety requirements of the country's strong standards.

The first-generation sodium-ion battery can not only be applied to various transportation electrification scenarios, especially in alpine regions, it has outstanding advantages, but also can be flexibly adapted to the application requirements of all scenarios in the energy storage field. 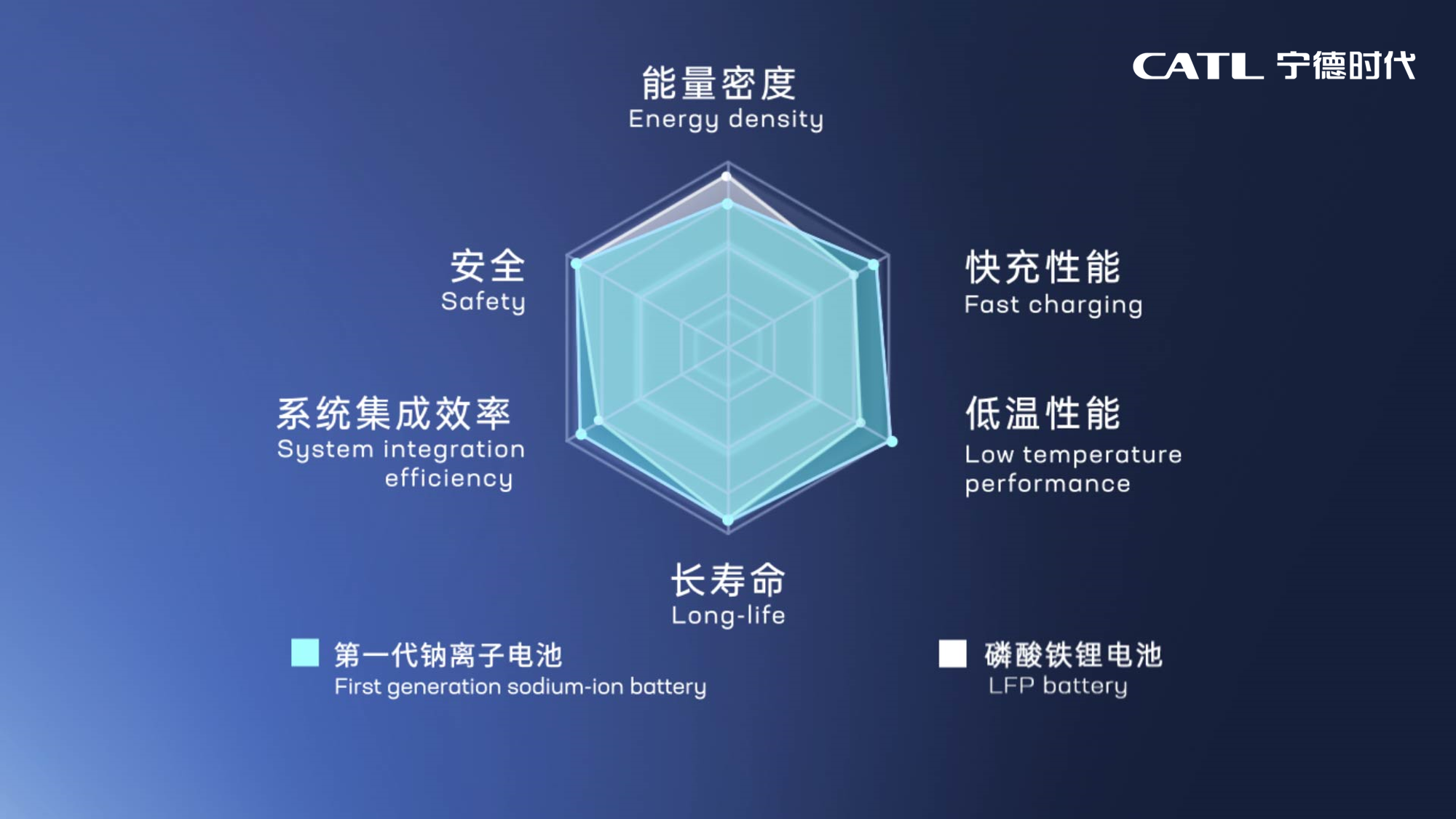 Basic research on materials and chemical systems is the key. Zeng Yuqun, chairman of the Ningde Times, said that some people think that it is difficult to innovate the chemical system of batteries and can only make some improvements in the physical structure. "But we believe that the world of electrochemistry is like an energy cube. The unknown is far greater than the known, and we are tirelessly exploring its mysteries."

According to Zeng Yuqun, CATL has built a high-throughput material integrated computing platform to conduct simulation calculations and design simulations on materials at the atomic level. With a deep understanding of the principles, advanced algorithms and powerful computing power, it is possible to find the genes of various materials. Combining points, develop various materials that are more suitable for sodium ion batteries, promote them to enter the fast path of industrialization, and continue to iterate. The energy density research and development goal of the next generation of sodium-ion batteries is more than 200Wh/kg.

At the press conference, Dr. Huang Qisen, deputy dean of the Ningde Times Research Institute, introduced that in terms of manufacturing processes, sodium-ion batteries can achieve perfect compatibility with lithium-ion battery production equipment and processes, and the production line can be quickly switched to complete the rapid layout of production capacity. At present, CATL has initiated the corresponding industrialization layout, and a basic industrial chain will be formed in 2023.

CATL said that it welcomes the participation of relevant research institutions, upstream material suppliers and downstream battery applications to jointly accelerate the improvement and development of the sodium-ion battery industry chain.

4. Crisis and Opportunity in the Ningde Era

Due to the popularity of new energy vehicles, a huge market for power batteries has been born.

According to SNE Research's forecast, by 2023, the global demand for power batteries for electric vehicles will reach 406 GWh, while the power battery supply is expected to be 335 GWh, a gap of about 18%. By 2025, this gap will widen to about 40%. The power battery industry has seen a serious imbalance in the structure of supply and demand.

In addition, according to the latest data released by SNE Research on July 29, CATL ranked first with a market share of 29.9% in the first half of 2021; South Korean battery giants-LG Energy, Samsung SDI, and SK Innovation Global Power in the first half of the year The total market share of battery installed capacity is 34.9%, ranking second, fifth and sixth respectively; Panasonic and BYD rank third and fourth with 15% and 6.9% market share respectively.

Although it has become a well-deserved leader in the battery industry, the Ningde era may have never felt relaxed. The opponents chased after him, and the position of the leader of the Ningde era was not strong enough.

At the "China Automotive Forum" held on June 18, LG New Energy Asia Marketing General Manager Park Jinyong said that the new generation of power batteries developed by LG Energy using high nickel quaternary (NCMA) as the cathode material will be put into production at its Nanjing base .

Tesla took the lead in handing out an olive branch to LG Energy. According to foreign media reports, Tesla plans to use LG Energy's NCMA quaternary lithium battery in the Model Y models made in China, and the Ningde era may be affected.

BYD has also begun to conquer the Chinese market with its blade batteries. At present, FAW Group, Changan Ford, Hyundai, Toyota and other auto companies have expressed that they have negotiated blade battery cooperation with BYD.

However, with the release of sodium-ion batteries, CATL may launch a counterattack.

Both BYD's blade battery and LG Energy's quaternary lithium battery are focused on safety performance, which coincides with the advantages of the first-generation sodium-ion battery in the Ningde era, but compared with the former two, low cost will be the competition of the Ningde era. A sharp edge in the market.

The Shanghai Nonferrous Metals website shows that since this year, the quotations of battery-grade lithium carbonate and battery-grade lithium hydroxide have risen by 66.04% and 96.97%, respectively. The price of key upstream materials continues to rise, which makes the market eager to find alternatives to lithium.