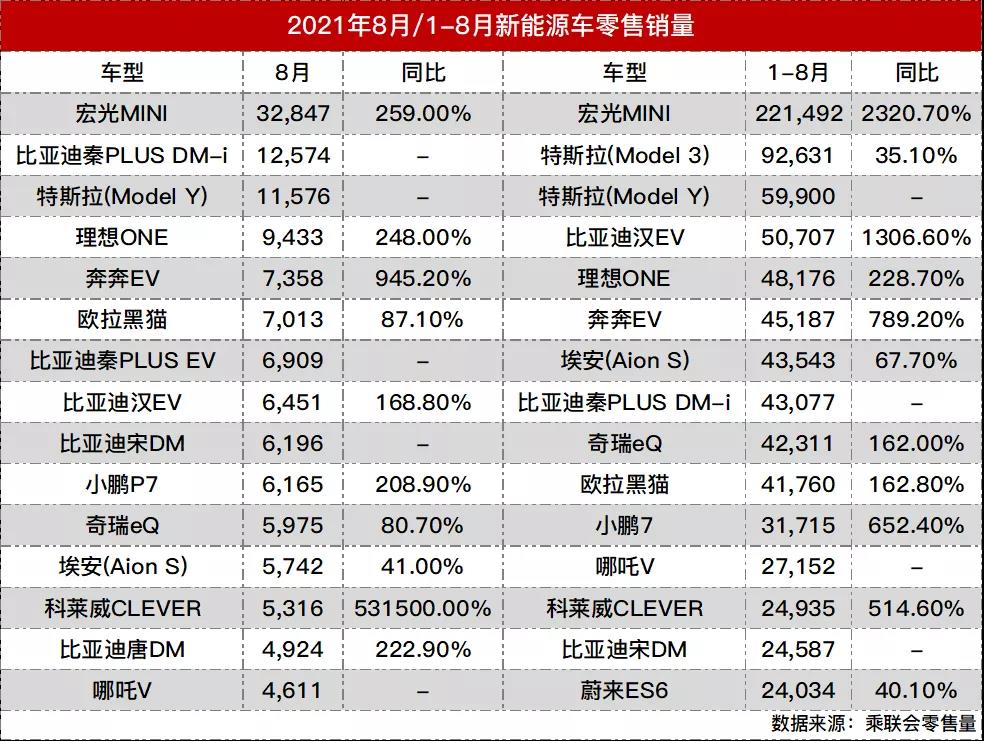 From the above data of EV car sales in China, Wuling Hongguang won the new energy sales without any doubt.

BYD's sales increased by 88.1% year-on-year to 66,622. As BYD’s first model equipped with the DM-i super hybrid system, Qin Plus DM-i sales have soared since its launch in January this year. In August, it exceeded 10,000 vehicles to reach 12,574, ranking second in the new energy list. In addition to Qin Plus DM-i, there are other models like Qin Plus EV, Han EV, Song DM and Tang DM also occur into the list of new energy vehicles.

As a popular brand in China's electric vehicle market, Tesla's market performance in August is not that good. In August 2021, Tesla’s wholesale sales in China were 44,264, of which 31,379 were exported, which means that the retail volume in China was 12,885, of which 11,576 were Model Y and 1,309 were Model 3 . It is not difficult to see from the data that although Tesla's sales in China in August hit a record high, most of the models were exported overseas, especially Model 3 models. In August, sales in China were only 1,309, which directly fell out of the new energy list. In July, Tesla exported a large number of Model Y, and in August it exported a large number of Model 3. Tesla CEO Musk previously said, “Tesla’s new cars produced in the first half of the quarter are mainly for export". Therefore, we can only think of this as a manifestation of Tesla's response to overseas market demand, rather than seeing Tesla's sales in the Chinese market starting to slump.