Power battery is the core component of new energy vehicles, and the battery separator plays an important role in the power battery. It mainly separates the positive and negative plates of the battery in a narrow space to prevent short circuit caused by contact between the two poles, but it can ensure that the ions in the electrolyte pass freely between the positive and negative electrodes. Therefore, the diaphragm has become the core material to ensure the safe and stable operation of lithium-ion battery.

The electrolyte is to isolate the combustion source, the diaphragm is to improve the heat resistance temperature, and sufficient heat dissipation is to reduce the battery temperature to avoid excessive heat accumulation leading to thermal runaway of the battery. If the temperature of the battery rises sharply to 300 ℃, even if the diaphragm does not melt and shrink, the electrolyte itself, the electrolyte and the positive and negative electrodes will also have a strong chemical reaction, releasing gas, forming internal high pressure and explosion, so it is very important to adopt suitable heat dissipation methods. 2. Heat conduction silicone gasket is added at the top and bottom of the electrode end respectively, so that the heat that is not easy to emit at the top and bottom is transferred to the metal shell through TIF thermal conductive silicon film to dissipate heat. At the same time, the high electrical insulation and anti puncture performance of the silicon film have a good protection effect on the battery pack. 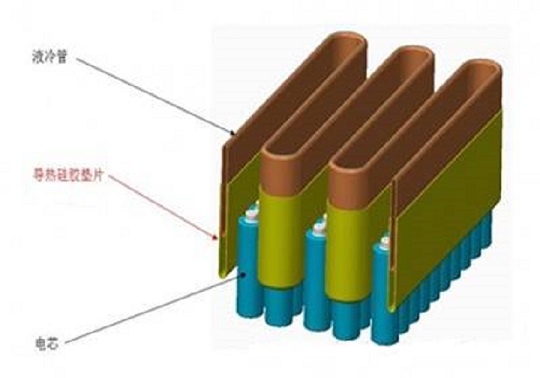 1. The heat of the cell is transferred to the liquid cooling pipe through the thermal conductive silicon film, and the heat is taken away by the free circulation flow of the coolant expansion and contraction, so that the temperature of the whole battery pack is unified. The strong specific heat capacity of the coolant absorbs the heat generated during the operation of the cell, so that the whole battery pack can operate in a safe temperature.

2. Thermal conductive silica gel sheet has good insulation performance and high resilience toughness, which can effectively avoid vibration, friction and damage between cells and short circuit between cells. It is the best auxiliary material for water cooling scheme.

1. This kind of battery pack has large space and good contact with the air. The exposed part can exchange heat naturally through the air, and the part at the bottom that can't exchange heat naturally is dissipated by the radiator. The thermal conductive silicon film fills the gap between the radiator and the battery pack to conduct heat, reduce vibration and insulate. 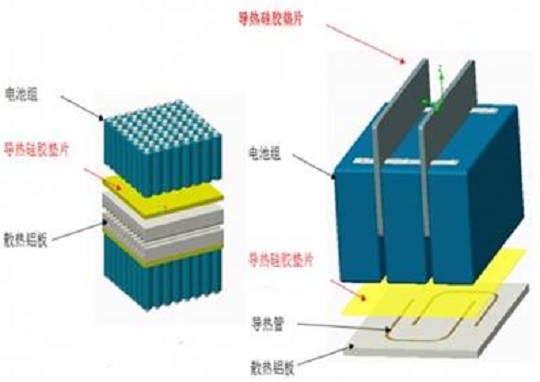